Sensory Strategies in between Anthropology and Cinema

This year’s RAI Film Festival Masterclass will be delivered by award-winning filmmaker Laurent Van Lancker, in conversation with Chris Wright. Van Lancker won the Basil Wright Prize at the RAI Film Festival for Ymako in 1998, and his new feature Kalès is in competition at this year’s festival. We will also screen his acclaimed 2006 feature Surya.

This masterclass will use a wide range of different examples to explore how cinematic strategies (sensory, narrative, collaborative) and practices (asynchronicity, decontextualisation) can be used to aid anthropological approaches to lived experience.

How can visual anthropologists create shared authorship, and sense of situated experiences? When they play with the fertile areas between art, anthropology and cinema, what implications does it have for knowledge and perception? Van Lancker will explore how cinematic practices can be a form of intercultural dialogue, when we understand that experiences and their evocations as ‘in’ bodies, minds, and cultures, but also ‘within’ and ‘between’ all these at the same time. 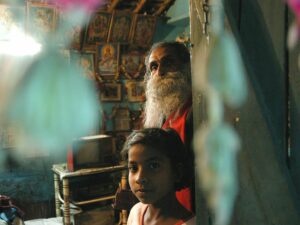 Laurent Van Lancker studied both Film and Anthropology, and he holds a PhD in Audiovisual Art. He lectures at film schools (INSAS – Brussels, UMAS – Split) and universities (FU BERLIN, WWU Münster). His early documentary works explored social and religious themes, and they were followed by a series of short works called Experimental Ethnographies. His long-feature documentary film Surya won international awards and had some theatrical releases. He made a few short fiction films and made his first long-feature award winning fiction film Brak (Fallow) in 2016. His last feature-length documentary Kalès has also won some awards and had theatrical release. His films were screened in major film festivals: IDFA, Oberhausen, FID Marseille, DokLeipzig, Festival Nouveau Cinema, Dubai IFF amongst others. Recently, he has also moved into Web and Installation art, having his video installations screened in museums, galleries, art spaces. His films explore inter-cultural dialogue, and draw on various modes: they are collaborative, hybrid and sensorial cinema. They propose a dialogue between ethics and aesthetics, poetics and politics.

Chris Wright is Senior Lecturer at the Anthropology Department, Goldsmiths. Originally trained as an artist, producing work in painting, photography, and video. He then worked for several years in independent filmmaking making feature length Super 8 and 16mm films, before becoming the Photographic Archivist at the Royal Anthropological Institute in 1992. During his time at the RAI, he was awarded a three-year Leverhulme Trust award to return three major collections of 19th century anthropological photographs to their source communities in the southwest USA, Sikkim (Himalayas), and the Solomon Islands (south Pacific). He taught as a Visiting Tutor in the Anthropology Department at Goldsmiths in the late 1990’s before doing his PhD at University College London and returning to the department as a lecturer in 2002. His teaching is largely around themes and arguments within visual anthropology, practical training in visual production, and the connections between anthropology and contemporary art practices.