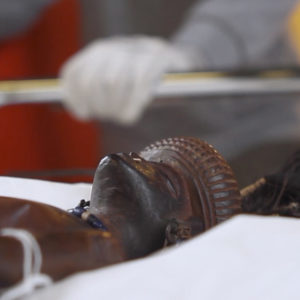 The Oxford English Dictionary defines a palimpsest as “a manuscript in which a later writing is written over an effaced earlier writing”. In Matthias De Groof’s sharp and subtle 2019 documentary, Palimpsest of the Africa Museum, the museum is manuscript and the earlier writing its colonial narrative.

The subject of the film is the Royal Museum for Central Africa in Brussels, closed in 2013 for renovations and a much needed renewal of its outdated attitudes. The film follows the discussions on the process of decolonisation that occur between museum staff and the group of Afro-descendent advisors employed to guide the process, raising questions surrounding whom the museum is for, whose story it tells, and its mission and purpose.

The film opens with warmly lit, close-up shots of the museum artefacts, immediately setting up their central role in the debates. The lighting and framing of these shots is reminiscent of the 1953 essay film Statues Also Die (Chris Marker, Alain Resnais & Ghislain Cloquet); however, unlike in this film, in Palimpsest of the Africa Museum it is the institution itself situating a reckoning of colonialism in the museum context. This is set up from its beginning as a tour guide is shown describing the violent and dominant histories that explain the presence of some of the museum’s objects to a group of children. This establishes that the museum is not a neutral space and that its contemporary attitudes are at odds with the pseudo-scientific presentation of “primitive” cultures evident within its cavernous halls.

At the heart of the film lie the museum artefacts, portrayed as thinking and feeling, alive rather than static. Stuffed animals are animated through handheld travelling shots. Shots of a figurine being wheeled upon a trolley are followed by shots of the ceiling quickly passing by, the camera adopting the viewpoint of this supposedly lifeless artefact. This notion of artefacts as sentient beings is most evident in the language of the voiceover; objects are personified, they have been ‘awakened’ and ‘want to express themselves’. The thinking behind these devices becomes clear as Joseph Ibongo Gilungula, the General Director of the Institute of National Museums of Congo, explains the deep relationship Africans have with the invisible world, a realm accessible through objects, which exist at the threshold of the tangible and intangible.

The film is constructed from roundtable discussions between the museum staff and advisors and shots of the museum being literally taken apart. A clever dialogue is thus created, as the museum is theoretically deconstructed by the advisors and staff and literally deconstructed by the workpeople. An advisor’s call for no ambiguity in the narrative surrounding King Leopold II, since he is such a clear symbol of colonialism, is intercut with shots of a large, bronze statue of King Leopold II being removed from the museum. Similarly, debate on whether the museum’s new narrative should be polyphonic or didactic follows shots exposing the artificiality of the museum’s previously singular, fact-based narrative. For instance, a woman shown removing the clothing from a life-size figurine comments ‘[i]t’s completely fake’, referring both to the specific exhibit and wider narrative.

However, whilst looking towards the future of the museum, the film also reflects on the past, illustrating the urgent necessity of decolonisation practices. Archival footage exposes the original intention of the museum, to be a witness to the ‘immense effort’ of Belgian colonists in achieving ‘civilization’ in Central Africa through mining. The horrific colonial history of the museum is most glaring in the film’s grave sequences. People are shown paying their respect to the seven Congolese people who died of pneumonia and influenza following King Leopold’s 1897 World’s fair exhibit, in which 267 people were imported and exhibited in a “human zoo”, the original manifestation of the museum. The revelation of the museum’s past adds to the impetus for decolonisation.
The film ends with an inter title which reveals the collaboration with the advisors made up just €167,084 of the total €68 million spent on the museum’s renovations and renewal. This wry conclusion suggests perhaps more could have been done. At a time where conversations on decolonisation are occurring in museums and cultural heritage worldwide, Palimpsest of the Africa Museum offers a unique and in-depth exploration of the issues, tensions, and questions at the heart of this important debate.