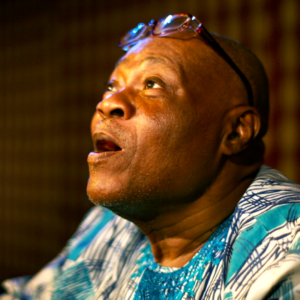 Elder’s Corner (2020) follows the mission of British Nigerian musician and filmmaker Siji Awoyinka as he seeks to regain the lost voices of his rich musical heritage. Charting the movements of High Life music during colonial rule, and the nationalistic push for independence to joyous Juju and the pioneering of Afrobeat, Awoyinka reflects the country’s highs and lows through the recording of its most iconic musicians.

Both historical essay and musical celebration, Awoyinka conducts us through a convoluted national identity with a joyous and energetic rhythm. The film states that ‘a singer is a preacher’ who represents and informs his congregation through ‘telepathy in music’. Nigeria’s complex history exists largely through forms of oral storytelling; a country of multiple languages that contains a broad range of music and expression from Afrobeat to Okiki, a praise poem telling a person of their family’s personal history. However, many of these types of music are hard if not impossible to find, and since none of the musicians seemed to have recordings of their old work, Awoyinka set out to find the iconic sounds of his upbringing and, with the help of American producer Bill Lee, relive these old songs of Nigeria.

The musicians speak fondly of their pasts, and despite their country’s hardships, many even remember colonial rule as a time of peace and plenty, when new forms of music from around the world came flooding into cities such as Lagos. From this, High Life, ‘Nigeria’s own music … Lingua Franca of West Africa’ was born, a combination of jazz and Caribbean calypso, pioneered by musicians such as E.C. Arinze. Rex Lawson went on to indigenize High Life music with traditional instruments. In that way High Life music was a unifying force in Nigeria, bringing together a country that was divided by language and culture.

This movement accompanied the political push for independence in 1960, in which music played a huge part in the celebration of national traditions and diplomacy that reflected Nigerian values.

However, this wave of optimism and celebration did not last long. Growing claims of corruption in democratic sovereign Nigeria led to a military coup in 1966, followed swiftly by a counter coup, which imposed martial law. Many people lost all their personal possessions, equipment and instruments. Yet songs such as “Happy Survival” showed hope and faith for the prosperity of life and music through hard times. Elder’s corner gives both poignant and precise historical lessons while flooding the senses with vivid colours and vivacious sounds.

The introduction of many Juju artists reflects the country’s swift desire to move on from times of war. They entitled themselves as Emperors, Kings, Admirals and other high status positions as a symbol of their reclaiming of power and prosperity in Nigeria for the triumph of love and peace over hatred and violence. The film worships these individuals as their names demand; revering them as they relive old feelings of hope.

Their newly recorded music soundtracks the archival footage of Nigeria’s economic boom. Infrastructure was expanded. Drinking, partying and celebrations increased. People were elaborately dressed. It was a time of decadence and musicians were paid handsomely.

But interviews with certain artists reveal inherent inequalities in Nigeria, for instance Monomono spoke of class divide. The Lijadu Sisters struggled to break into a musical world that was itself unequal, due to their gender, despite their enormous talent. Inequality is ever present in the film, yet noticeably juxtaposed to the music that is enjoyed by one and all.

Following this economic boom, a series of corrupt military dictatorships sent Nigeria into a rapid economic decline and many revered musicians faded into obscurity.

This national history is told to a soundtrack of joyous and energetic music, but some interviewees carry a sense of guilt that their generation destroyed their country. However, Awoyina celebrates the positives: ‘after speaking to the musicians…I have a better sense of where I come from, of who I am’. The film reflects the sentiment of an old Nigerian proverb that states ‘a flowing river that forgets its source will very quickly run dry’. Through the celebration of its incredible heritage of music, Nigeria can hopefully be carried to more bountiful waters.