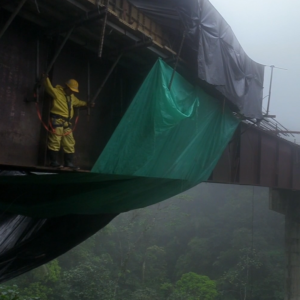 Suspension (2019) charts a journey of human folly in the face of an unrelenting natural world and an unreliable government. It follows the conception and attempted construction of the Mocoa – San Francisco Bypass from 1991 to the project’s indefinite suspension in 2017. Director Simón Uribe Martínez tells the stories of the local people affected by this project and their desire for government help to build safe passage through the treacherous mudslides, avalanches and floods of the imposing rainforest. The film is filled with images of personal strife and struggle as well as an unflinching view of the difficulty and magnitude of the task at hand. But at its core is the resilience and determination of the working people and their hope.

Suspension is framed by two instances of destructive flooding. The first destroyed the Mocoa-San Francisco Bypass’s predecessor in 1991. However, this only forced the hand of the government, who had been implored to replace that road that was so infamous that it was colloquially known as “The Springboard of Death”; a narrow mud track that curved an average of 18 times per kilometre and resulted in casualties every single year. The second flood occurred in 2017, largely destroying the town of Mocoa, leaving the unfinished road to be reclaimed by its natural surroundings.

What is evident in the film’s cinematography is the ever presence of dark, dramatic rain clouds that often dominate the screen and act as an ominous reminder of the continual threat of flooding. The only bright, sunlit images of the road we see are in an animated government video; showing ambitious futuristic plans of towering overpasses over bright forests and glades, watched by sceptical farmers and workers. In fact, this is the closest we get to interacting with the decision makers involved in the project. All the information is provided by local people, many of them already wearied by empty promises and government lies.

The dense natural surroundings are overwhelming. There is minimal use of music, instead a constant hum of forest life and thundering clouds accompany the spectacular landscapes.

Yet when construction begins, the people approach it with vim and vigour. Vast expanses of forest and cloud are divided and contained within geometric shapes while ranks of rock bolts hold the mountain walls in place. Surrounded by foreshadowing clouds, the construction of this overpass looks both awesome and fragile, standing strong yet precariously above a turbulent sea of vegetation.

But as soon as construction begins and hopes are still high, the doubts about an unreliable and absent authority creep back in. The government starts firing workers and production slowly stops as it becomes evident that their promised 130 million dollars has dried up. Many people lose their jobs, and it becomes clear that all the money and effort that has been spent, has been done so in vain.

The film ends in tragedy. The destruction of Mocoa in 2017 takes hundreds of lives, and the bridge that symbolised a hope for a safer life begins to blend back into the environment from which it rose. Rock bolts become perches for beautiful birds, and the bridge a home for insects and plants. However, Martinez ends the film in a mood that is not all doom and gloom. The bridge becomes a strange destination for tourists taking selfies, kids playing and motorcycle stunts. A bizarre memorial to bureaucratic ineptitude for local people to enjoy. For people in the Colombian Amazon, life is often a treacherous road with no beginning or end, a constant challenge, yet one they approach with energy and resilience.