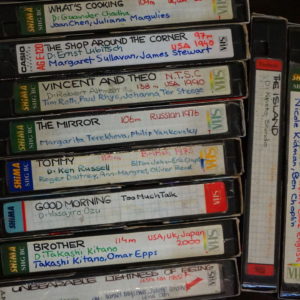 Niyaz Saghari’s 2020 documentary, VHS Diaries, is the tale of a defiant cinephile subculture that pursued their passion for cinema despite strict government restrictions and the threat of imprisonment in post-revolution Iran. Saghari collates diaries she wrote during the era of video censorship and her personal VHS film archive, alongside interviews with film historians, enthusiasts and ‘filmis’, underground dealers of videos, to tell a story of bravery, community, and an intense love of cinema.

The film begins with fuzzy, golden, super-8 footage of someone recording sound and shots of an extensive collection of tapes and diary entries accompanied by a wistful, melodic soundtrack. A voiceover of the filmmaker introduces the central role cinema has held in her own and her friends’ lives. This opening sets up the film’s personal nature and its foregrounding of memory. One interviewee recollects watching films at family parties with other children; Gone with the Wind (1939, Victor Fleming) was a particular favourite of the adults due to its length keeping the little ones occupied for longer. Others recall the joy of watching and discussing films every Tuesday. The filmmaker remembers the excitement of the ‘filmi’ visiting the house with a fresh selection of videos. These personal memories give the film a strong sense of humanity and humour and are highly compelling given their political context.

The mention of these recollections may make it appear that the film revolves around nostalgia for this era, but as the heroic ‘filmi’ Mr J explains towards the film’s ending ‘[a] fetishistic look at the VHS era is not the point…It’s the situation, the age, the moment that has been captured in your memory’. Far from romanticising this age of underground cinephile activity, the film divulges the horrendous reality of the situation. One interviewee recollects being detained for two nights for possession of a video of a football match, another remembers his imprisonment for three months after being caught with three tapes. Perhaps most striking is a sequence of Mr J sharing paintings he created during his court hearing for possession of illicit tapes and following his time in prison. These dark creations featuring nightmarish figures with absent eyes tell the true cost of the government’s oppressive regime.

The film is constructed as a collage of excerpts from films in Saghari’s personal collection of VHS tapes from the period, home video footage, archival images and footage shot more recently of the interviewees. This wonderful amalgam of different material speaks both to the random and layered nature of human memories and to the aesthetics of VHS tapes during the video ban. Interviewees explain that films were imported by pilots and then copied, meaning most tapes were poor quality, with graininess and sections of glitching. The filmmaker explains that it was common to record random things at the end of the films, such as pop videos. The film can thus be seen as formally meta; not only does it explore the culture surrounding the video tapes but also the materiality, decay and aesthetics of the tapes themselves.

Saghari ends the film by reflecting on changes that have occurred during the four years it took to finish the film. She notes the filtering of the popular Telegram app and week-long shutdown of the internet by the Iranian government in 2019, suggesting this may be the beginning of a new age of media censorship. This lends the film a pertinence and urgency, a sense of looking to the future alongside the past. VHS Diaries offers a deeply personal story of the resilience of film lovers in post-revolution Iran and portrays the power of cinema in creating communities and sparking joy, as well as highlighting the issues surrounding censorship that exist in Iran to this day.