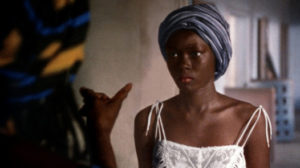 On International Women’s Day, we take a moment to celebrate the strong female presence at this year’s upcoming RAI Film Festival (27 – 30 March). The programme overflows with women’s stories, illuminating an incredible diversity of experience across the globe. And, we are proud to say, over half of the films in this year’s RAI Film Festival have a woman director. Festival Reporter Ella Broad recommends three to watch.

Zahida is a documentary following the life of Zahida Kazmi, Pakistan’s first female taxi driver. We join her on her daily duties and learn what it means for her to work in this role. She speaks of the dangers she faces as a women, the inequality in Pakistan and of her responsibility as a twice widowed mother of six to her children and to their futures. This elegant and insightful short film articulates Zahida’s story in a patient and dignified way.

Karachi-born and London-based filmmaker and producer. Her rich portfolio includes documentary, animation, and art installations. Gul has an eye for stories about identity, particularly female identity, and the place of individuals in a political context.

This is an intimate portrait of one woman which has big things to say about the position of women in contemporary Pakistani society. We feel Zahida’s sorrow as she reflects on her lot. But the film is also infused with hope, and is a testament to Zahida’s strength, drive and resilience, and that of women like her.

Mossane focuses on the life of teenage girl who is greatly admired and loved by all in her village in Senegal. The film follows her daily interactions – speaking with her mother about her fast approaching marriage to a rich man, helping her sick brother who has left university due to a politically charged strike, and exploring a burgeoning romance with an old friend, Fara. The drama pivots on the clash between her responsibilities to her family and her own youthful desires.

Pioneering filmmaker and ethnologist Safi Faye, whose work we celebrate at this year’s Festival with our Special Focus. Whilst she first became known for appearing in Jean Rouch’s Petit à Petit (1970), she soon went on to work as a director herself. Her first feature length film, Kaddu Beykat (1975, aka La Lettre Paisanne / Letter from the Village) was the first feature by a sub-Saharan African woman to be commercially distributed. Alongside filmmaking, she gained a doctorate in ethnology in 1979, with a thesis on Serer religions. Faye’s films draw on her research, focusing on rural and farming communities, and often exploring oral history traditions, the lives of women, spirituality, everyday village life and access to land. She works with both documentary and fictional modes and often uses devices that explore the intersection between the two.

This is a film from an ambitious and powerful female storyteller, that combines ethnographic insight with sophisticated artistry. It is rarely screened, it deserves to be better known.

Mossane screens on Friday 29 March at 19:30 at Arnolfini. The screening will be followed by a discussion of Faye’s work and her legacy. Buy tickets here.

A Very Dai Girl is a short documentary which sketches the daily life of Xiao Yue, a 22 year old woman from Yunnan province in the south of China.
We see Xiao Yue cook, care for her grandmother, sew, and farm – but also visit an amusement arcade with friends, and talk with her boyfriend on her smartphone.  As a young woman of the Dai ethnic group, Xiao Yue is caught between the traditions of her people, and the modernising China surrounding her. She reflects on what is expected of her as a woman in the Dai culture and how she longs for the greater gender equality that she perceives in China’s dominant Han culture .

MengHua Zhang recently graduated from the prestigious and innovative MA Visual Anthropology programme at Goldsmiths. She is one of the exciting new voices in ethnographic film that we showcase in our Student Programme. With A Very Dai Girl, MengHua Zhang shows she can discuss culture, gender and relationships in modern China with a subtle and mature voice.

This is a quiet and patient film that demonstrates sophisticated sensitivity. The sense of intimacy we feel is startling, and it a pleasure to spend time with the striking woman at the heart of this film.

A Very Dai Girl screens on Thursday 28 March at 15:30 at Watershed (as part of Student Programme 4). Buy your tickets here.


You can access to these films, as well as all other screenings, events and conference sessions at the RAI Film Festival with a Festival Pass. Buy yours today!